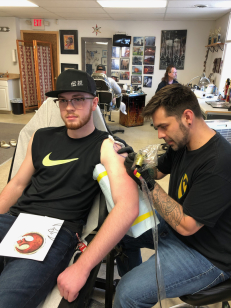 I began my tattoo journey after I met Dan Plumley (RIP) at the American Academy of Art in Chicago, IL 2002. I started my apprenticeship under Dan in Fall 2005 at Skin of a Different Color in Aurora, Illinois, for about eight months. After tattooing on family, friends, and a few tattoo parties, I felt it was time to make it real. In 2007, I found a little shop in Aurora and worked there for five years. In 2012 I started my freelance business, FigSigArts, and set up shop at the Villa Park Tattoo Expo. The following week I started working as a private contractor at Spider Tattooz in Sycamore, IL. Not only was I back in my hometown of Sycamore, but I was also lucky to work alongside Rick "Spider" Kramer (RIP) for eight amazing years. He was more than my mentor; he was a brother, father, uncle, and best friend. I learned how to be a better all-around person because of Spider. Unfortunately, in 2020 the world's worst year ever got even worse, my days at Spider Tattooz came to a tragic halt when our shop's building caught fire, and tragically a few months later, Spider lost his year-long battle with cancer. I will forever miss his energy, smile, handshake, and elbow bumps because one of us was tattooing while the other was leaving for the night.

Two years have come and gone; I completed my bachelor's in graphic design at Judson University in Elgin, IL. I was trying to find work in graphic design, but I couldn't find something that had what I was looking for near where I lived. Then one day, I tattooed a marine veteran running the Level Zero Hockey club out of Chicago who said I know a marine I skate with who owns a couple of tattoo shops. How cool is that a vet who owns tattoo shops and plays hockey? So I connected with the shop owner, and a few text messages later, he asked why I wasn’t working for him.

I'm happy to let everyone know I am back at full force in the tattoo game. I am now proudly working at a new Veteran-owned and operated shop, Atmosphere Tattoo Gallery, in Schaumburg, Illinois.

Here's where you can enter in text. Feel free to edit, move, delete or add a different page element.